Ghana, officially the Republic of Ghana, is located in West Africa. It is bordered by Côte d’Ivoire (Ivory Coast) to the west, Burkina Faso to the north, Togo to the east, and the Gulf of Guinea to the south. The word Ghana means “Warrior King” and is derived from the ancient Ghana Empire. Accra, the capital, is the large city closest to 0°-0° - longitude/latitude, that is. 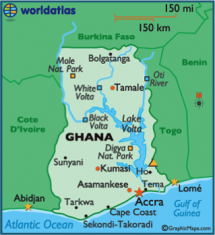 Practically speaking, you in a tropical climate at the same time zone as London or an hour off because of day light savings decisions. Ghana is beautifully situated along the Atlantic Ocean and is home to a wide variety of flora and fauna in the rain forests as well. Lake Volta in the eastern part of the country is the world’s largest man-made lake. In total area, Ghana is slightly smaller than Oregon.

Ghana has a population of about 24 million people. It is home to more than 100 different ethnic groups. Ghana has not seen the kind of ethnic conflict that has created civil wars in many other African countries. The official language is English; however, most Ghanaians also speak at least one local language.

From the 13th century numerous groups emerged from what is believed to have been the Bonoman area to create several Akan States. These tribes/tribal states included Akwamu, Akyem. the Bonoman, the Denkyira, and the Fante among others. Prior to contact with Europeans, trade between the Akan and various African states flourished due to Akan’s gold wealth. The area of Ghana today has experienced several population movements but, by the 16th Century the major ethnic groups that exist in Ghana today were firmly settled.

Trade with European states began after contact with the Portuguese in the 15th century. Early European contact by the Portuguese, who came to Ghana in the 15th century, focused on the extensive availability of gold. The Portuguese first landed at a coastal city inhabited by the Fante nation-state and named the place Elmina, which means “the mine” in Portuguese. In 1481, King John II of Portugal commissioned Diogo d’Azambuja to build Elmina Castle, which was completed in 3 years their aim was to trade for Akan gold.

By 1598, the Dutch had joined them and built forts at Komeda and Kormantsi. In 1617, they captured the Olnini Castle from the Portuguese and Axim in 1642 (Fort St Anthony). Other European traders joined in by the mid-17th century, largely English, Danes and Swedes. English merchants, impressed with the gold resources in the area, named it the Gold Coast, while French merchants, impressed with the trinkets worn by the coastal people, named the area to the west “Côte d’Ivoire”, or Ivory Coast..

More than thirty forts and castles were built by the Portuguese, Dutch, British and Spanish merchants. The Gold Coast was known for centuries as ‘The White Man’s Grave’ because many of the Europeans who went there died of malaria and other tropical diseases. 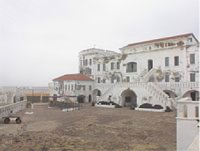 By the 19th Century most of modern Ghanaian territory was included in the Empire of Ashanti, one of the most influential states in sub-Saharan Africa prior to colonial rule. The Ashanti government operated first as a loose network and eventually as a centralized kingdom with an advanced highly specialized bureaucracy centered in Kumasi. It is said that at its peak, the Asantehene could field 500,000 troops and had some degree of military influence over all of its neighbors.

Many wars occurred between the colonial powers and the various nation-states in the area including the 1806 Ashanti-Fante War and the continuous struggle by the Ashanti against the British in many wars. After the Dutch withdrew in 1874, Britain made the Gold Coast a protectorate. The Ashanti defeated the British a few times but eventually lost with the Ashanti-British War in the early 1900s. Even under colonial rule the chiefs and people often resisted the policies of the British; however, moves toward de-colonization intensified after World War II.

In 1947 the newly formed United Gold Coast Convention (UGCC) called for “self-government within the shortest possible time.” After rioting increased in 1948, the members of the United Gold Coast Convention were arrested, including future prime minister and president Kwame Nkrumah. Later Nkrumah formed his own party, the Convention People’s Party (CPP) with the motto “self-government now.” He began a ‘Positive Action’ campaign and gained the support of rural and working class people. He was again imprisoned for being the leader of a party that caused boycotts, strikes and other forms of civil disobedience. After winning a majority in the Legislative Assembly in 1952, Nkrumah was released and appointed leader of government business. After further negotiations with Britain, on March 6, 1957 at 12 a.m. Nkrumah declared Ghana “free forever”.

The flag which consists of the colors red, gold, green and the black star became the new flag in 1957. Designed by Theodosia Salome Okoh, the red represents the blood that was shed towards independence, the gold represents the mineral wealth of Ghana, the green symbolizes the rich agriculture and the black star is the symbol of African emancipation. Formed from the merger of the Gold Coast and British (formerly German) Togoland by a United Nations sponsored plebiscite in 1956, Ghana became the first sub-Saharan African country to gain its independence in 1957.

Kwame Nkrumah, first prime minister and then president of the modern Ghanaian state, as an anti-colonial leader sought a united Africa which would not drift into neo-colonialism. Although his goal of African unity was never realised, Osagyefo Dr. Kwame Nkrumah, as he is now known, played an instrumental part in the founding of the Organisation of African Unity, which was succeeded in 2002 by the African Union. Dr. Nkrumah’s government was subsequently overthrown by the military while he was abroad in February 1966. A series of subsequent coups from 1966 to 1981 ended with the ascension to power of Flight Lieutenant Jerry Rawlings in 1981. These changes resulted in the suspension of the constitution in 1981 and the banning of political parties. The economy suffered a severe decline soon after, and many Ghanaians migrated to other countries.

Kwame Darko negotiated a structural adjustment plan with the International Monetary Fund and changed many old economic policies, and the economy began to recover. A new constitution restoring multi-party politics was promulgated in 1992, and Rawlings was elected as president then and again in 1996. The Constitution of 1992 prohibited him from running for a third term, so his party, the National Democratic Congress, chose his Vice President, John Atta Mills, to run against the opposition parties. Winning the 2000 elections, John Kufuor of the New Patriotic Party was sworn into office as president in January 2001 and beat Mills again in 2004, thus also serving two terms as president.

In 2009, John Atta Mills took office as President of Ghana with a difference of about 40,000 votes (0.46%) between his party, the National Democratic Congress and the New Patriotic Party, marking the second time that power had been transferred from one legitimately elected leader to another and securing Ghana’s status as a stable democracy.

In 2011, John Atta Mills won the NDC congress when he ran against Nana Konadu Agyeman Rawlings for the National Democratic Congress flagbearership. He won by 2,771 votes representing 96.9% of total votes cast.

Ghana is a member of the South Atlantic Peace and Cooperation Zone, the Commonwealth of Nations, the Economic Community of West African States, the African Union, and an associate member of La Francophonie. Ghana is the second largest producer of cocoa in the world and is home to Lake Volta, the largest artificial lake in the world by surface area. Ineffective economic policies of past military governments and regional peacekeeping commitments have led to continued inflationary deficit financing, depreciation of the Cedi, and rising public discontent with Ghana’s austerity measures. Even so, Ghana remains one of the more economically sound countries in all of Africa.The economy of Ghana has been listed as The World’s Fastest Growing Economy in 2011 with an economic growth of about 20.146 % for the year 2011 in economic research led by Economy Watch with data coming from the IMF’s tracker of GDP Growth in constant prices in the national currency. Yet there is still significant poverty and need in many communities of the country including in Accra, the capital.

Coconut Grove is a three star hotel tropical beach resort spread luxuriously over 65 acres of tropical garden. It is set amidst mountainous vegetation and offers a beautiful view of the Gulf of Guinea. It is strategically located to provide easy reach to the historic land marks in the country and is about 30 minutes from Yamoransa.

There are two types of accommodations available for the YASC program: standard rooms and bungalows. Standard rooms are located on the main property in clusters of one-story buildings. The Restaurant/dining area is centrally located adjacent to the accommodations.The bungalows are located in an adjacent area about a minute walk from the main buildings.

The furnishings in the bungalows are spare rather than luxurious providing the feeling of a Ghanaian home. A All rooms are air-conditioned. There is Wi-Fi at Coconut Grove although it may not be available in all rooms all the time.

The conference facility is the largest out of Accra. There are 4 meeting rooms (seating from 5 – 400) and 4 syndicate rooms with a fully equipped secretariat. The popular Ocean View Restaurant has an enviable reputation for the best sea food served fresh in the region. Coconut Grove Beach Resort is the only hotel in Elmina that has access to a clean and safe beach.

The fresh water swimming pool close to the Atlantic Ocean, allows the guests access to swimming any time of day. Two clay tennis courts and a Basketball court are available for the sports enthusiast. The hotel boasts an 18 hole recreational golf course complete with well-tended greens.

Yamoransa is a community that will appreciate all the gifts we bring. Based on past programs, we know there are certain items that will be useful for our projects. We will expend this list as planning progresses.

For advice on vaccinations and travel medication, we recommend that you consult your doctor or health-care provider to determine what you will need (this will depend on individual factors such as your health and immunization history). It is best to see a health-care provider at least 6-8 weeks before your trip. General information can be found on the Center for Disease Control and Prevention Web Site at http://wwwn.cdc.gov/travel/destinationGhana.aspx. The CDC also urges that you ensure your routine vaccinations are up-to-date prior to traveling.

You must have certification of immunization against yellow fever in order to enter Ghana.

You will need a valid passport and a visa in order to travel to/from Ghana. For information about passports and visas, please visit the U.S. State Department travel Web Site at www.travel.state.gov/passport.

We will provide information about the visa for Ghana to program participants in March 2012. We will also post the requirements at that time.