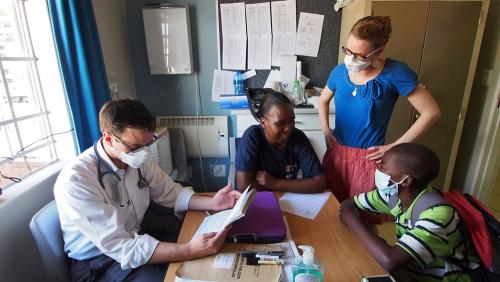 A planned trip this summer to Cape Town, South Africa, will mark the first time in the Yale Alumni Service Corps’ (YASC) decade-long history that Yale faculty have accompanied the volunteers. It’s an important milestone, says Joao Aleixo, director of the YASC, as the program, sponsored by the Yale Alumni Association, looks to further strengthen its ties to the university and provide an experience that is not only meaningful to trip participants, but one that offers real improvement to the communities they serve.

“This program is not just about service, but also about career growth, lifelong learning, mentorship, and service,” says Aleixo. “By partnering with Yale entities we are strengthening those ties.”

Zach Porterfield, clinical fellow in medicine (infectious diseases) at Yale, will spearhead the trip’s public health track alongside Douglas Hildrew, assistant professor at the Yale School of Medicine. Porterfield has spent 17 years traveling to South Africa researching and treating chronic ear infections in rural areas and supporting the training of women in medicine as part of a collaboration with South Africa’s University of KwaZulu-Natal (UKZN). They will be working with 26 of the 100 volunteers traveling to Cape Town and aim to screen up to 3,000 children from infancy through third grade for ear infections and vision impairment. Chronic, untreated ear infection in the area has led to widespread hearing loss, which could be prevented with earlier identification and treatment. They’ll draw community participants through a collaboration with Amandla Development, an organization founded by Yale alum Scott Clarke ’02 B.A. which provides educational opportunities to South African youth.

“Amandla will be critical to the success of this effort,” says Porterfield, “because they have a long-term presence and trust with the community. Part of their role is identifying issues that are limiting the potential of kids, and that includes hearing and vision loss.”

The trip itself is being coordinated by Rob Biniaz ’75 B.A., who says that thanks to the involvement of Yale physician scientists, alumni volunteers with medical expertise, and coordination with Amandla, “This could be the best public health program we’ve ever run.”

The 10-day expedition to Cape Town also builds on an enduring partnership between Yale School of Management (SOM) and the University of Cape Town Graduate School of Business, one of the original members of a 32-school Global Network for Advanced Management spearheaded by SOM. During the recent spring break in March, 16 students from SOM went to Cape Town to participate in a one-week Global Network Week where they studied “The Political Economy of Business in Africa.” As part of the upcoming YASC trip, Camino de Paz, director of global initiatives at SOM, will guide volunteers in providing support for entrepreneurs and small business owners at Solution Space Philippi, a multi-colored building that was once a cement factory and now functions as a business incubator.

“For me, it’s exciting because it’s really driven by alumni,” says de Paz of the experience. “We’re in the sixth year of our network and most of what we’ve done has been with faculty and students. Getting our alumni involved in our global initiatives is a big step forward.”

The YASC trips are part of a continuous effort to support education, health, athletic, and business initiatives in areas of need, so participants are asked to return to the same country several years in a row, and YASC coordinates with partners on the ground to ensure that support services are ongoing.

When they do initial site visits prior to a trip, says Aleixo, “We meet with community stakeholders and say: ‘What are your greatest needs?’ We are there to give our time and talent.”

In the community of Philippi in Cape Town, that includes helping students to code and starting a school newspaper  –  interests identified by the superintendent of schools. Education is always a core component of these missions. “There is so much disease in this region,” says Porterfield, “that sometimes these issues [like ear infections] are not as striking. We want to teach them that this is something we can treat.”

In the past, YASC has traveled to Rio Claro and Rio de Janeiro in Brazil where the Yale School of Forestry & Environmental Studies has research collaborations with leading universities; the Fort Mojave Indian Tribe in Nevada in conjunction with Native American Yale Alumni and Ashley Hemmers ’07 B.A., an alum member of the tribe; and Ghana in Africa, building on the university’s partnership with the University of Ghana, which was recently extended during a visit by Yale President Peter Salovey to the region. There are typically two service trips per year – in March and July.

Biniaz, who practices law in California, became hooked on these volunteer missions after his first experience traveling to Ghana with YASC in 2012. He returned to Ghana twice, and then traveled with the group to India. “When I first went, it reconnected me with Yale in a big way,” Biniaz says. “Living on the West Coast, I’m physically removed. I found myself being proud again to be part of Yale and involved in this service work.”

It’s also, he adds, a way to meet alumni from all parts of the university, not just one’s own class. “It’s a great way to connect with other Yalies from all different graduate and professional schools,” Biniaz says. “I’ve made friends for life.”